The act of marking livestock with fire-heated marks to identify ownership has origins in ancient times, with use dating back to the ancient Egyptians.[1] Among the ancient Romans, the symbols used for brands were sometimes chosen as part of a magic spell aimed at protecting animals from harm.[2]

In English lexicon, the word "brand", common to most Germanic languages (from which root also comes "burn", cf. German Brand "burning, fire"), originally meant anything hot or burning, such as a "firebrand", a burning stick. By the European Middle Ages, it commonly identified the process of burning a mark into stock animals with thick hides, such as cattle, so as to identify ownership under animus revertendi. The practice became particularly widespread in nations with large cattle grazing regions, such as Spain.

These European customs were imported to the Americas and were further refined by the vaquero tradition in what today is the southwestern United States and northernMexico. In the American West, a "branding iron" consisted of an iron rod with a simple symbol or mark, which cowboys heated in a fire. After the branding iron turned red hot, the cowboy pressed the branding iron against the hide of the cow. The unique brand meant that cattle owned by multiple ranches could then graze freely together on the open range. Cowboys could then separate the cattle at "roundup" time for driving to market. Cattle rustlers using running irons were ingenious in changing brands.[3] The most famous brand change involved the making of the X I T brand into the Star-Cross brand, a star with a cross inside.[4][5] Brands became so numerous that it became necessary to record them in books that the ranchers could carry in their pockets. Laws were passed requiring the registration of brands, and the inspection of cattle driven through various territories. Penalties were imposed on those who failed to obtain a bill of sale with a list of brands on the animals purchased.[6] 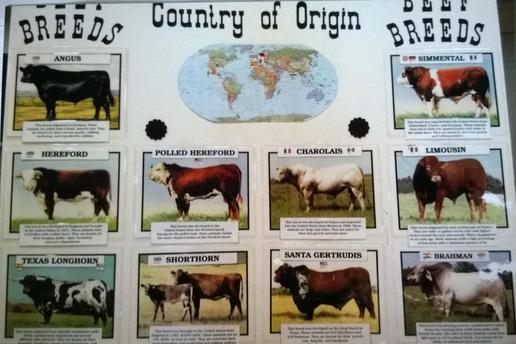